Although the following article by our co-founder is dated, it continues to contextualize concerns about safety and discuss some of the root causes of violence.

Safety and Danger at the US-Mexico Border:

How can we really know what’s going on?

I’ve lived in Austin almost 17 years and still have many friends in my hometown of New York who know I regularly visit Mexico at the border.  Lately when the subject comes up, they ask nervously:  “Isn’t it dangerous?” They seem to be wondering if I have become reckless or foolish.  For my part, I realize how daily media coverage of ‘death stalking the Rio Grande’ has scared news consumers everywhere and promoted assumptions that the violence is viral, targeting everyone equally and even leaping out of Mexico.  From my perspective, the public has a real dilemma getting reliable, detailed information and accurate assessments of a great range of situations that exist in Mexico.  What can I say to my friends?  Lamely I answer, “it’s complicated” and “I could give you a better answer if you have the time.” 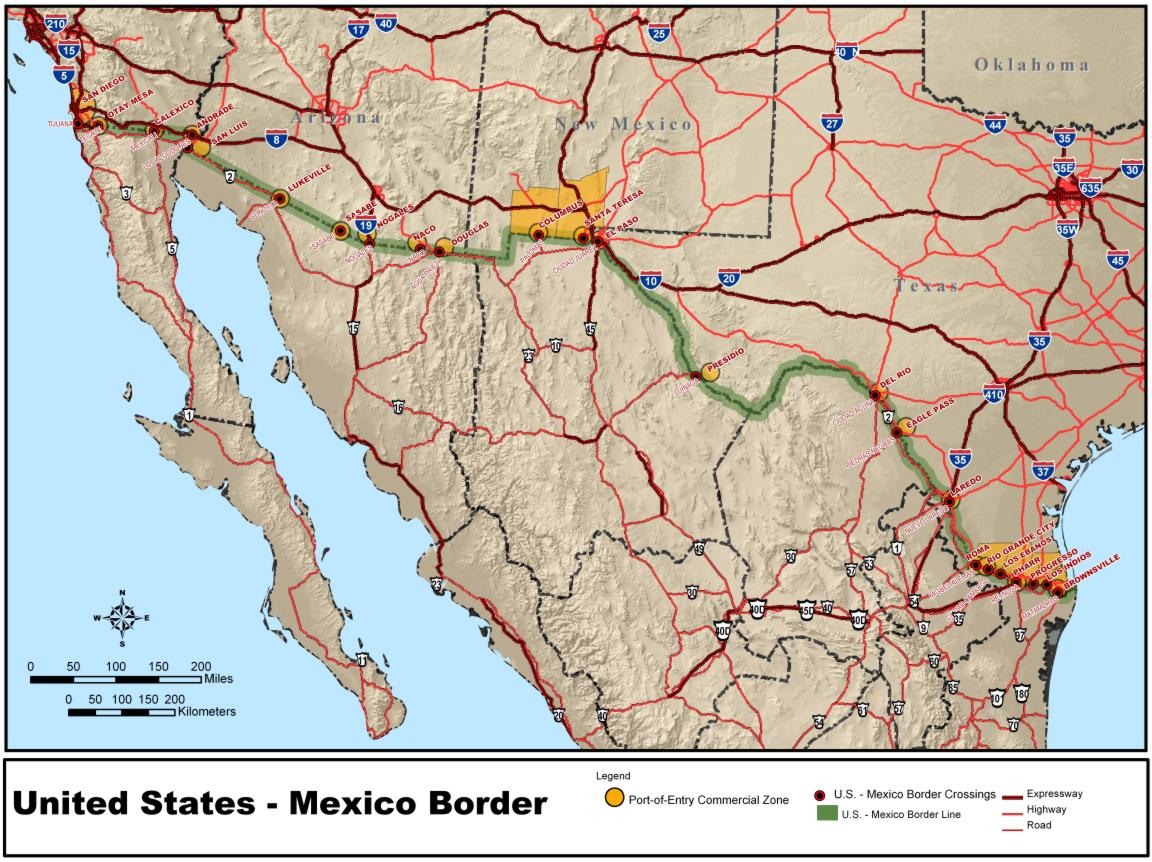 Though fear in Mexico and the US escalated under the administration of  Mexican President Felipe Calderón (2006-2012) who staked a lot of his reputation on winning the drug war and gave it a lot of publicity,  the “Mexico murder rate” went down.  A well-documented report issued by the Mexico Solidarity Network on August 8, 2010, published the facts, for those who care to know them.

“Long before the current narco-battles for turf captured national and international headlines… the national murder rate in Mexico hovered around 20 per 100,000 residents.” “In 2009, the most recent year for which statistics are available, the rate was 14.”

By contrast murder rates in many US cities are higher than in Mexico, for example Washington (31.4), Baltimore (36) and Kansas City (25.5). It is true however that the generally low average in Mexico is pushed up by three border states, led by Chihuahua, where Ciudad Juarez is located, (74), followed by Durango (60) and Sinaloa (47).

More important than citing statistics, the MSN report challenges readers to dig deeper and question the media focus on violence.  MSN editors warn, “Uninformed, racist images… are permeating the consciousness of US cities, largely because of the dramatic decontextualized media coverage of Mexico.  We are concerned that these images are impacting the current debates around immigration reform, making overt racism acceptable in places like Arizona.” When it comes to legislation, could Texas be far behind?

Austin Tan Cerca de la Frontera has an urgent concern too.  Lurid news stories lead the public to automatically and immediately associate violence with the border, ignoring what may be, in the long term, a more important threat to social order— the injustice which unfortunately is historic, but which we have watched accumulate fast at the border since the start of NAFTA.  After 15 years of visiting maquiladora workers and their communities, we witness how “free” trade impoverishes workers and migrants from the south and how foreign-owned factories, known as maquiladoras, prosper frequently depending on their ability to break laws and violate workers’ rights mandated by the Mexican Federal Labor Law.  On a material, cultural and spiritual level, the maquiladora system is wasting border communities helping make fertile terrain for the cartels.  However, we also witness a grassroots social justice movement that carries on, nimbly changes strategies with new economic upheavals and scores important short- and long-term victories.  All of this is invisible to the press and public mesmerized by “war.”

To continue the discussion with my New York friends, my next answer to their anxious question would be another question:  who do the drug cartels, the lawlessness, and the spiral of violence endanger?  A recent Salvadoran immigrant now living in Austin had a lot to say on the subject.  Arturo’s path led him through Piedras Negras, Coahuila, one of the cities that Austin Tan Cerca visits.  He spoke graphically about how drug cartels work with human traffickers getting immigrants across the border.  Together they target migrants, kidnap, torture, blackmail and extort them.  It’s a business, there’s money in it, and not much risk, because they target the vulnerable with precision.  According to Arturo, they see everything in the street and even in church-sponsored migrant shelters. They do not target visitors from the US since, in their professional calculation, we are not among the powerless.  Meanwhile, in Austin, staff at immigrant shelter Casa Marianella hears the stories and corroborates the systematic violence against migrants, especially women.  “No woman crosses the border without being ‘abused.’”

We all know that innocent bystanders can get caught in the crossfire.  When I taught adult education in Brooklyn in the 1980s, one morning the whole class heard gunfire in the street and later learned that Mr. Daly, a devoted elementary school principle, had been shot and killed as bullets flew between youth gangs.  That was during a period of high unemployment and high drug activity in the Red Hook section, a dangerous area of public housing that urban development policy created.  I think I see some analogies with the US-Mexico border today.

Perhaps we’ve been lucky but in 15 years of quarterly travel to the border, Austin Tan Cerca has never experienced a violent incident or even a threat.

This is true with one unusual exception: one of our delegations became the target of a politically motivated abuse of power by Mexican immigration authorities.  In April 2013 during the heat of a union battle between an entrenched, corrupt union (the CTM) and the upstart, democratic Metal Workers Union (SNTMMRM) vying to represent workers in a Finnish company, PKC, our delegation visited Ciudad Acuña, the site of the controversy.  Following what he claimed was an “anonymous tip,” a Mexican immigration official claimed our group had violated visa rules.  Basically there are none for a visit of less than 72 hours in an area within the border zone.  Nevertheless Sergio Arturo Calderón López detained our group for 9 hours.  Actually he detained 8 out of the group of 11, following racial profiles and passing over members of our group who looked Mexican.  In August of 2013 we learned through the press he had resigned his job and moved to Canada for family reasons.

Apart from this incident, we attribute our safety to our access to good advice. We have an advantage that other travelers do not; we can monitor and assess conditions carefully through local and knowledgeable community members, the Comité Fronterizo de Obreras/os, our Mexican partners in solidarity.  They let us know in detail how to exercise caution.  We know that they would tell us not to come if we faced risks. We also know that we have privileges that protect us—of citizenship, relative wealth and political connections, and sometimes racial profile.

However, just because we have those privileges, we do not want to ignore the reality and the tragedy that is befalling Mexico, especially the poor.  Julia Quiñonez, the Comité’s national coordinator, wrote in April, 2009: “For many years, Piedras Negras has characterized itself as a safe and peaceful city, in addition to being one of the cleanest in Mexico. Piedras Negras and Ciudad Acuña have made considerable efforts to keep their good reputations as a result of the demands of organized citizens. These communities are able to organize themselves to bring changes to improve working conditions, and they are also able to demand accountability from their local governments.”

In June 2014 we saw self-organized citizenry at a new level.  Quiñones ran for political office to represent Piedras Negras in the Coahuila State legislature.

Quiñones writes: We are confident that when you visit you will be safe… [Y]ou will always be accompanied by people that we trust and you will visit places where poverty is the main concern rather than drugs or weapons.  I hope that these are considerations that may assure your families.